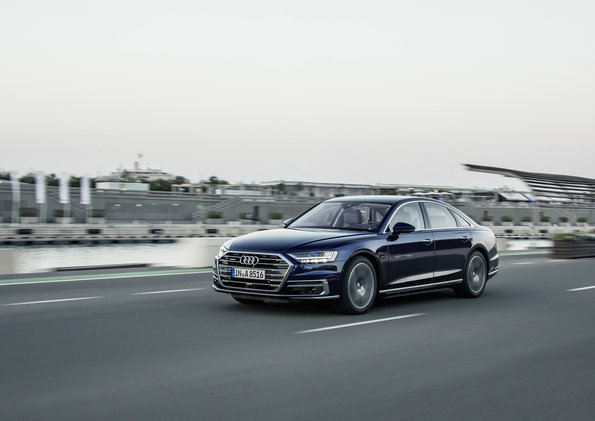 The 2019 Audi A8 continues the brand's legacy of luxury by offering intelligent technology that allows the car to drive itself in certain conditions. This partially self-driving car can also park itself and intelligently adjust its suspension for potholes and bumps.
Autonomy Today

The 2019 Audi A8 continues the brand’s legacy of luxury by offering intelligent technology that allows the car to drive itself in certain conditions. This partially self-driving car can also park itself and intelligently adjust its suspension for potholes and bumps.

Taking the Stress out of a Traffic Jam

The 2019 edition of the Audi A8 features the new Audi AI Traffic Jam Pilot, the world’s first Level 3 system to automate driving in a production vehicle. Level 3 autonomy describes a system that can be engaged in specific scenarios and certain road environments and conditions. When the feature is engaged, the driver can do other things, such as read or look at their phone. While other companies committed to autonomous cars like Google, Ford, and Volvo are skipping Level 3 in order to provide a Level 4 and 5 experience as soon as possible, Audi sees the benefits of a more gradual approach. Level 4 denotes the ability to self-drive in most environments while Level 5 describes fully autonomous driving in all conditions.

Audi is accepting full legal liability if something goes wrong while its automated driving system is in charge of the car. Due to this, Audi enforces several conditions that must be in place before the system becomes engaged. For starters, the driver must be traveling at speeds below 37 mph. The self-driving car system interprets this as being in a traffic jam.

Traffic Jam Pilot then verifies with each of its sensors that there are clear lane markings and a divided highway. Oncoming traffic must be separated by a physical barrier. At this point, if all the conditions are found to be met, the system enters Level 3. This means that you can take your hands off the steering wheel and your feet away from the pedals. You can take your focus away from driving. The system will handle any incidents that occur, such as other cars entering your lane.

When the autonomous car driving system detects that you are not on the freeway, it becomes disengaged. In these cases, the system will enter Level 2 semi-autonomous driving. This means that the A8 will handle the pedals for you, but you are responsible for steering and keeping your eyes on the road.

So, what are the limits of this Level 3 system? Could you take a nap? This is not recommended. A camera constantly monitors and analyzes your face and eyes for movement. If the system detects that you have fallen asleep, it disengages and gives you 10 seconds to take over control. The car begins to decelerate while the system uses visual and audio alerts to warn you to assume control of the vehicle. This escalates to having the seat belt tug on you and the audible alerts become louder. If you don’t respond within the 10 seconds, the car will slow to a stop on the shoulder with the hazard and interior cabin lights on. A call will then be automatically placed with emergency services.

So, if Audi is assuming legal liability for any issues that occur when its autonomous car system is engaged, who assumes the legal liability during that 10-second handoff? Audi says that the issue has not been legally defined yet. However, the automaker claims it would still bear responsibility. The statutes for this type of car need to be developed and clarified for each country.

Since it features the first semi-autonomous hardware system submitted for government approval in history, Audi faces a long battle ahead to gain approval. This calls into question whether the 2018 release will be met and, if it does, whether it will come with the Traffic Jam Pilot software enabled. One possibility is that the car will launch without traffic jam enabled, and then the owner can bring the car to the dealer to enable it once the legal requirements of the technology have been satisfied.

Despite the unprecedented hurdles faced by the A8, Audi continues to pursue the future. Audi board member Peter Mertens told the media that the A8’s Level 3 self-driving car system will be capable in the near future of handling “something around” 81 mph. Mertens says that the self-driving system has been designed with levels beyond Level 3 in mind. Other features provided by the 2019 Audi A8 include the Audi AI Remote Garage Pilot, which is a system that uses the forward-looking laser scanner to navigate your car into a tight garage for parking. The Audi A8’s parking assist system, Parking Pilot, scans for available parking spaces whenever your speed dips below 25 mph. You can select parallel or perpendicular parking. Audi’s AI also features active suspension, which virtually erases bumps and potholes from the road by detecting them and using the torsion bars located at each corner to lift or lower the affected wheel.