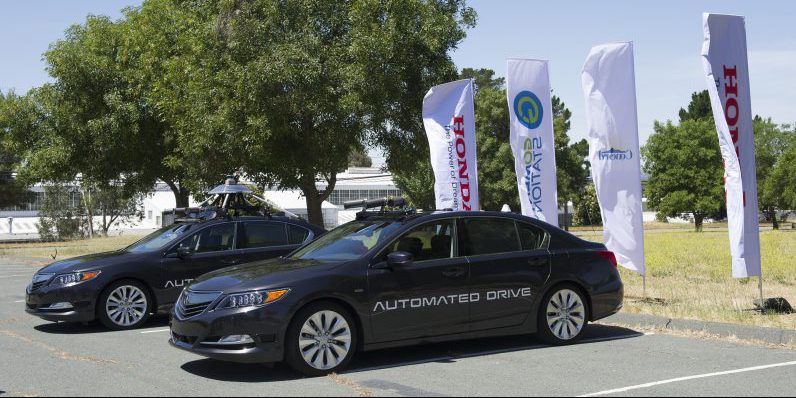 If you had autonomous car technology in development, where would you test it out? A self-driving car prototype can’t start out on public roadways. The potential for crashes or casualties is too high.
Players

If you had autonomous car technology in development, where would you test it out? A self-driving car prototype can’t start out on public roadways. The potential for crashes or casualties is too high.

Instead, the vehicle testing must take place in an enclosed environment that replicates real-world circumstances but doesn’t expose bystanders to harm. Enter GoMentum Station, a vehicle-testing facility in Concord, California. Its approximately 2,000 acres of private land have become testing grounds for both connected and autonomous vehicles.

GoMentum’s land wasn’t designed with autonomous vehicle testing in mind. Rather, this is a story of repurposing.

In 1942, during World War II, the Navy opened Port Chicago on California’s Suisun Bay. Within the next few years, the Navy acquired adjacent land on which to construct buildings, an airfield, and more. The original section of land was known as the Tidal Area, and the additional portion became the Inland Area. Altogether, this was the Concord Naval Weapons Station.

As times changed, so did Naval operations. In 1999, the Navy shuttered the Inland Area, and its closure was approved in 2005. Only the Tidal Area remains operational, and its ownership has transferred from the Navy to the Army.

Since no one wants 5,000 acres of good land to go unused, the Navy and the City of Concord have approved a Reuse Plan that includes ideas for parks, housing, and a school on the remainder of the former Naval base. The land will eventually transfer to city ownership, perhaps near the end of 2018.

In the meantime, this land is far from being neglected. Under the supervision of the Contra Costa Transportation Authority, over 2,000 acres of the former base have become GoMentum Station. This old base has been turned into pioneering grounds for the future.

At its height, the Concord Naval Weapons Station was essentially a small city. This land still has multiple buildings, miles of roads, railroad tracks, fire hydrants, curbs, and other obstacles to navigate. It’s an ideal setting for replicating the experience of driving on real-world streets.

Like municipal roads, the 20 miles of pavement within the boundaries of GoMentum Station aren’t in pristine condition. In many places, they’re cracked and bumpy, and they could use a new paint job. That’s exactly the kind of setting that autonomous cars will have to learn to navigate if they’re going to function in the real world.

With GoMentum Station’s roads and intersections, automakers and tech companies can simulate city conditions. Because this is private land, groups have the opportunity to set up situations that would be dangerous to try on public roads. For example, they can run tests to see how a car would respond to a person who darts into traffic.

Here, unlike on public roads, tech companies can choose to operate their vehicles completely driverless. There are no constraints that require having a human in the vehicle during operations.

In 2017, GoMentum Station received official designation from the U.S. Department of Transportation as a proving ground for autonomous car technology. It is the largest of the 10 official proving sites.

Local authorities intend to continue using part of the former Concord Naval Weapons Station as a testing facility once the Reuse Plan comes to fruition. The plan includes permanent designation of a portion of the land for GoMentum Station.

Some of GoMentum’s key partners include EasyMile, the Uber Advanced Technology Group, and the Honda Research Institute USA. EasyMile is working on the development of autonomous multi-passenger shuttles. Uber ATG’s focus is on long-haul trucks for autonomous operation. Honda researches both self-driving cars and connected cars for use in the private sector (connected cars are equipped with technology that allows them to communicate with one another).

Other partners include the Bay Area Rapid Transit District, ITS America, and California Polytechnic University. Even international organizations like the Canadian Automated Vehicles Center of Excellence, the Singapore Ministry of Transport, and Tongji University have gotten involved.

GoMentum Station may not have been designed for self-driving innovation, but the future looks bright for this former naval base’s role in autonomous advancements.