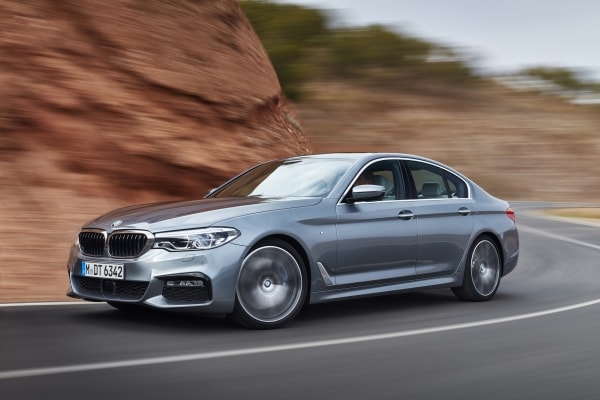 Autonomous cars are coming. In many places, they are there already in both Level 4 and Level 5 varieties. The BMW 5-series isn't at those levels yet, but the company's newest mid-range cars have several features that hint tantalizingly at the future to come.
Autonomy Today

Autonomous cars are coming. In many places, they are there already in both Level 4 and Level 5 varieties. The BMW 5-series isn’t at those levels yet, but the company’s newest mid-range cars have several features that hint tantalizingly at the future to come.

None of the features on the current BMW 5-series cars are intended as fully autonomous options. The features are intended to be a sort of “co-pilot” that assists the human driver instead of a system that produces a true self-driving car.

The list of options is formidable. First up is the active cruise control with Stop & Go. This system allows the driver to pre-program up to four different speeds for the cruise control and to access them with a single button push. Through a radar system, the cruise control can adjust the car’s speed automatically when an obstacle appears even to the point of stopping. If the obstruction is only there for one to three seconds, the system can accelerate back to the preset speed by itself. If the duration is longer, the driver must initiate the acceleration. If the driver is in a traffic jam, the system will even turn off and restart the engine after a lengthy standstill. The adaptive cruise control can be set for speeds as low as 19 mph and as high as 130 mph.

The steering and lane control assistant helps keep the vehicle in the center of its lane. It combines multiple radar points and a stereo camera to evaluate both the position of the car relative to lane and shoulder markers and the distance to any cars in front the car. On two-lane highways, it keeps track of the single or solid double line in the middle of the road. The assistant is identical to the one on the 7-series. Because the system is designed as an assistant and not a truly autonomous system, it is defined as a Level 2 system, particularly because it can function on its own for only 30 seconds before sounding a warning tone to the human driver.

There are two additional systems that are similar to the steering and lane control assistant but will only activate in certain situations. The first of these is the side collision avoidance system, which does exactly what it says. If someone else is swerving at the vehicle from out of the blind spot, the system will attempt to steer in the opposite direction. If that way is suddenly blocked, the driver will have to apply the brakes. The second system is called Evasion Aid, which detects obstacles that appear suddenly, and without warning, in front of the vehicle. For example, if a car in front suddenly brakes sharply, the system will automatically steer the 5-series into an adjacent empty lane. BMW claims that this works at speeds up to 100 mph.

In most cases, the vehicle will do something to warn the driver in any situation where human control is necessary. The steering wheel will vibrate in some of those situations. In others, there will be warning tones, while in other situations, there will be both.

One of the most interesting gadgets on the BMW 5-series is its use of gestures. It is possible, for example, to adjust the volume on the sound system by rotating one’s hand clockwise to increase or counterclockwise to decrease. The driver can also change stations or skip tracks by making swiping motions. While the 5-series is not yet a self-driving car, these gesture-based systems might foreshadow how drivers of the future might control their Level 5 vehicles during times when the systems of the autonomous cars of the period shut down for whatever reason.

The parking assistant uses the same kind of technology as the on-the-go systems. The system scans for proper parking spaces at speeds of 22 mph or slower. Once the system is engaged to park the car, it will steer and shift the gears itself while the driver must apply the throttle and the brakes in a cooperative effort between driver and machine.

When compared to the Waymo autonomous cars, the BMW 5-series is not nearly as advanced. It is, however, a production model instead of a highly modified vehicle that has yet to finish its final testing. The features on the 5-series are well-designed, and the company does not overstate their capabilities. Some of the self-driving cars of the future will be luxurious, and BMW looks to be part of that equation.