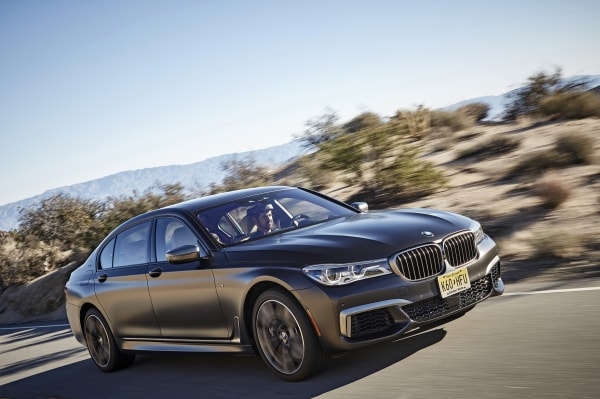 The BMW 7 Series is a full-size luxury sedan that has been in production since 1977. By 2018, it had reached its sixth generation of design updates.
Autonomy Today

The BMW 7 Series is a full-size luxury sedan that has been in production since 1977. By 2018, it had reached its sixth generation of design updates. The 7 Series is BMW’s flagship car, and it is available as either a sedan or a limousine. When it comes to trying out new designs and technologies, BMW often introduces them in the 7 Series before moving them into their other models. The sedans have four doors and standard front-wheel and available all-wheel drive. The most recent BMW 7 Series vehicles are the G11 and G12, which began production in model year 2015. The G11 has a shorter wheel base compared to the G12 but both are four-door luxury sedans.

BMW has created what it calls “intuitive intelligence” as a part of its iDrive version 6, which is the most recent form of their driving software as of 2018. The intuitive intelligence offers controls for a variety of features, such as controlling the temperature of the cabin before you get into the vehicle and remote parking. This can be accomplished with the remote control, Display Key, or Touch Command tablet.

The iDrive software also features enhanced navigational options for the driver. The driver can zoom in and out on a touchscreen in order to view maps while navigating. The Display Key also allows you to remotely park your vehicle, which is a feature that could also be useful in self-driving cars. The Touch Command console offers a touchscreen for information and entertainment. It can be used to change the type of media, change the Sirius radio station, or make calls with your connected device. The tablet is located in the center console between the front seats.

The BMW 7 Series is available as an electric hybrid car. If plugged into a 240-volt charging station, charging the battery takes about three hours. If it is plugged into a standard household outlet, attaining a full battery charge takes about seven hours. With a fully charged battery, the BMW 7 Series may go 14 to 20 miles before it needs to be recharged again. The developers of autonomous cars could build upon this technology to increase the distance that the cars are able to go between charges. For longer commutes, the BMW 7 Series has an 8.5-gallon fuel tank. The vehicle can use the electric-only option for a short commute and the premium unleaded gasoline option fuel for a longer drive.

The BMW 7 Series has a variety of transmission settings that allow its software to choose the most efficient fuel setting. The transmission functions include Comfort, Sport, Sport+, Adaptive, Eco Pro, and MaxE Drive. When the vehicle is on MaxE Drive, it will use the electric battery until it reaches 87 miles per hour or until the battery runs out of power. With autonomous cars, developers are also aiming to allow the artificial intelligence software to optimize the vehicle’s use of fuel and power.

The BMW Display Key is a piece of proprietary technology available for an additional fee in the 7 Series vehicles. This technology provides the driver with information about the vehicle’s fuel or battery charge level, estimated range, when it needs an oil change or other service, and whether or not its doors are locked. The BMW Display Key is a part of the key fob or remote, which allows you to check in on your vehicle from inside of the grocery store or your office. This kind of remote information technology could also be useful in self-driving cars. For example, you could find out how many miles the autonomous car could take you on its current level of battery charge.

Not only does the BMW 7 Series have a lot of technology that is accessible to the driver, but it also has structural changes related to high-tech options. It is the first production car to use carbon fiber in its chassis. It also uses aluminum and ultra-high tensile steel in its chassis and frame. This combination of lightweight yet strong materials has resulted in a 190-pound reduction in the weight of the 2016 model year and more recent versions of the 7 Series.

Most of the vehicle’s carbon fibers are in its roof. By using lighter materials on the top of the vehicle, its center of gravity is lower. This could make the vehicle safer, which would also be important for autonomous cars. The use of lighter weight materials is also applicable to self-driving cars. Since many of the ideas behind autonomous cars involve their use as urban taxis or delivery vehicles, reducing their weight could make them more efficient in how they use fuel and the electric battery.