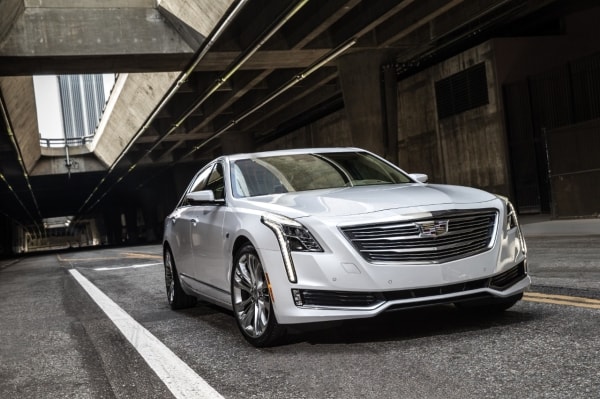 The Cadillac CT6, which stands for "Cadillac Touring 6," is a full-size luxury car that offers cutting edge semi-autonomous features. As part of Cadillac's aim to offer a range of interior features, the CT6 is available in a wide variety of trim levels.
Autonomy Today

The Cadillac CT6, which stands for “Cadillac Touring 6,” is a full-size luxury car that offers cutting edge semi-autonomous features. As part of Cadillac’s aim to offer a range of interior features, the CT6 is available in a wide variety of trim levels.

Powertrain Features of the Cadillac CT6

The CT6 comes with a standard engine or a hybrid engine. Its base gasoline engine features 265 horsepower and a 2.0-liter, turbocharged four-cylinder setup. The next step up in trim levels features a 335-horsepower, 3.6-liter V-6 engine. The top trim level has a 404-horsepower, 3.0-liter twin-turbo V-6 engine. All of these engines pair with an eight-speed automatic transmission. The EcoBoost, a feature that General Motors is putting into its self-driving cars, allows the engine to optimize its fuel usage.

As part of its safety enhancement features, the CT6 has a camera that is integrated into the rear-view mirror. This camera is set up to project a digital image of what is behind the vehicle when you are going in reverse. For added driver convenience, the digital image can be zoomed in so that you can see in more detail. Autonomous cars are also using this type of camera technology in order to safely back up from a parking space or a driveway. This feature is also helpful for aiding complex movements such as parallel parking.

The Lane Departure Warning system in the CT6 is also similar to that used in the self-driving cars that are currently under development. This technology is primarily used in SAE Levels 4 and 5, in which there is a human driver in the car who can take over if needed. When drifting occurs, the Lane Departure Warning sounds an audible alarm to alert the driver. It activates a system that allows the vehicle to slightly steer itself back into the proper lane. This feature can be very helpful for drowsy or distracted drivers.

For added highway safety, the CT6 integrates Lane Change Alert with Side Blind Zone Alert technology. The Lane Change Alert sounds an audible alarm if the vehicle is about to enter into a lane where there is already a vehicle. In a self-driving car, the car would not change lanes until it could do so safely. With a human-driven car, the audible alarm would alert the person to not change lanes. The Side Blind Zone Alert would activate a light in the corresponding side mirror to show which side of the vehicle is affected. An audible alarm would also sound. These features are helpful for driving on multilane roads or in passing zones.

Also concerned with those outside the car, engineers built a Front Pedestrian Braking system into the Cadillac CT6. Self-driving cars also have this feature, especially those that will be used as taxi or fleet vehicles in urban environments. The front pedestrian alert slows or even stops the vehicle in order to avoid a pedestrian crossing the expected path of the car. It uses radar and cameras to activate the alert.

The CT6 comes with Super Cruise technology. After the driver engages the cruise control, the software in the CT6 takes over, automatically adjusting the speed to the flow of traffic. It also automatically adjusts the steering so that the vehicle stays in its lane. These features are often used in SAE Level 4 and 5 autonomous cars. The human driver can disengage the Super Cruise at any time and fully take control of the vehicle as needed. Super Cruise is available on the Cadillac CT6 cars made after September 2017. It is a part of the top tier trim package for the vehicle.