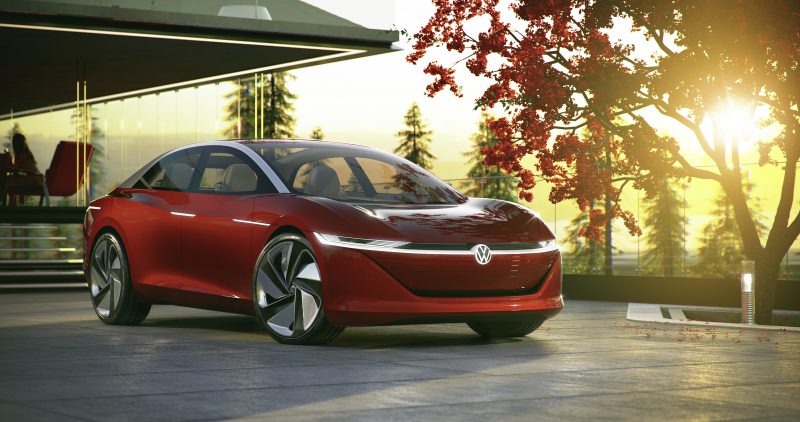 The Volkswagen I. D. Vizzion is a self-driving concept car first introduced in 2018 at the Geneva International Auto Show, which took place starting on March 6, 2018.
Autonomy Tomorrow

The Volkswagen I. D. Vizzion is a concept car first introduced in 2018 at the Geneva International Auto Show, which took place starting on March 6, 2018. The I. D. Vizzion expands upon the technology in the Volkswagen hybrids and electric vehicles and has features that are synonymous with self-driving cars, such as a digital chauffeur. Volkswagen says that this car could be used by people who cannot drive themselves, such as the elderly.

Teasers of the I. D. Vizzion

As of March 2, 2018, Volkswagen had not released much in the way of details about the I. D. Vizzion. Instead, the company is releasing teasers about what the concept car has to offer. The teasers so far have consisted of videos, which highlight light emitting diode ambient lighting in the passenger cabin and a large glass panel in the rooftop of the car. The teaser videos also show a floating seat, which could be relevant to autonomous cars. In self-driving vehicles, the seating arrangements may be more flexible, allowing the riders to do more while the car drives itself. The I. D. Vizzion is a concept car at this point, so it may be that Volkswagen has not yet hammered out all the details of the features it will have.

The I. D. Vizzion will have a full-length center console in the cabin. People will be able to see the things on it because it has an LED filigree for illumination. The ability to allow the digital chauffeur and artificial intelligence to control the car could allow a person to converse with other riders, relax and put his or her feet up, or access the information or entertainment options on the center console, instead of having to navigate. A person might be able to be productive or even take a nap while the self-driving car takes care of the navigation and operation of the vehicle.

The I. D. Vizzion is to be an all-electric car with SAE Level 5 autonomy. It will have one motor at each axle of the chassis, providing both speed and prompt response. A review of the vehicle notes that it will have a range of about 413 miles on its battery before a recharge is needed. The engine of the I. D. Vizzion has an output of 300 horsepower, which is in line with the other cars that Volkswagen produces. The battery provides 111 kilowatt hours of power.

This self-driving car is expected to have a top speed of 112 miles per hour. The low center of gravity provided by mounting the motors under the axles could increase the safety of the I. D. Vizzion and reduce its risk of rollovers. This is also important to autonomous car development and the need to build in safety systems that can augment what the artificial intelligence is able to do.

Instead of having touchscreens or buttons for the riders to push for changing the information, entertainment, heating, air conditioning, and other features in the I. D. Vizzion, riders will communicate with it through voice and hand gestures. The artificial intelligence system built into the self-driving car will be able to learn the voice and the hands of each occupant and remember his or her preferences and other details. When the artificial intelligence needs to initiate a communication with one of the I. D. Vizzion’s occupants, it will do so using its own voice system or with augmented virtual reality displays.

The artificial intelligence in the I. D. Vizzion will allow the self-driving car to autonomously navigate and operate the vehicle. To that effect, it will not have a steering wheel inside of the cabin. Volkswagen already has three other vehicles in its I. D. series. The Vizzion is planned to be wider and longer, with premium features on the inside. It is estimated that a production I. D. Vizzion will be available to the public for purchase in 2020 with a limited amount of the features that are expected in autonomous cars. The 2020 model will be a hatchback design. By 2025, the I. D. Vizzion should be released in multiple styles and with all the SAE Level 5 features that Volkswagen has planned for the line of autonomous cars.