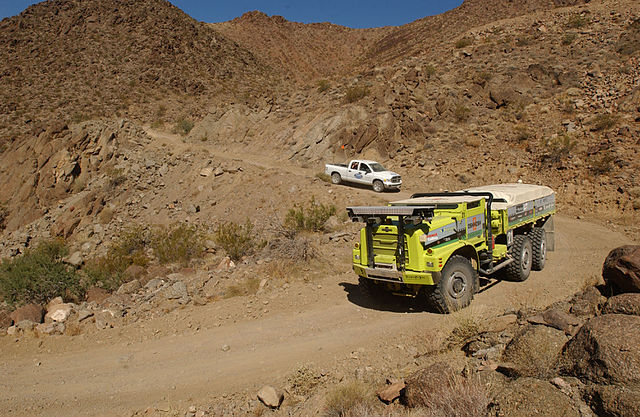 The lessons learned, and the ideas sparked by these competitions, have influenced the development of self-driving cars in ways that are hard to quantify.
Autonomy Today

The first DARPA Challenge in March of 2004 was initiated with the goal of nurturing the development of technologies necessary for the very first fully autonomous ground vehicles, with the objective of meeting a congressional mandate to make one-third of all ground military forces autonomous by 2015. While this goal was not achieved, the competition spurred intense competition and development of the autonomous car technology that is on the verge of entering America’s roadways. Every single vehicle in the first DARPA Challenge either crashed, broke down, or caught on fire. Since none of the vehicles finished the route, no prize money was awarded.

A day after the first DARPA Challenge, DARPA announced that there would be a second DARPA Grand Challenge in the autumn of 2005, 18 months after the first challenge. The new challenge would be on a 132-mile course in Southern Nevada. Out of the 195 vehicles participating in the challenge, only five completed the course. Stanford University, which didn’t even participate in the first DARPA Challenge, won with their entry named Stanley, completing the course with a time of 6 hours and 53 minutes. The team claimed the prize money in the amount of $2 million.

The third DARPA Challenge, known as the DARPA Urban Challenge, was held at the former George Air Force Base in Victorville, California. With the lessons learned in the previous two competitions, DARPA wanted to hold the challenge in an urban environment. Eighty-nine teams initially applied, and 35 teams were invited to the National Qualification Event, or NQE. The NQE was a demanding eight-day testing period.

Eleven teams emerged from the NQE and competed in the Final Event. The competitors received the information they needed about the course through two files: One “map” file of the final course was received when the finalists were announced, but the file communicating the order of checkpoints that each competitor had to visit was not communicated until five minutes before the start of their launch. This allowed the contest to be a true test of autonomous driving. Unlike in previous iterations of the Grand Challenge, corporate interests had become more prevalent and involved in the competition. Carnegie Mellon University led the “Tartan Racing” team. The Tartan Racing team finished in first place with a 2007 Chevy Tahoe named Boss.

Each successive contest of the DARPA Grand Challenge resulted in acquiring more experience and fostering more technological development. The lessons learned, and the ideas sparked by these competitions, have influenced the development of autonomous cars in ways that are hard to quantify. The individuals, teams, and companies that were involved in the competitions have gone on to become leaders in the field.

Carnegie Mellon University has been prominently featured in the history of the DARPA Challenge. In 2004, their car, named Sandstorm, completed the furthest distance of any of the cars in the competition before getting hung up on a rocky ridge in the mountains. In the 2005 Grand Challenge, the Carnegie Mellon Red Team’s cars “Sandstorm” and “H1ghlander” finished in second and third place, respectively.

Sebastian Thrun, director of Stanford’s Artificial Intelligence Laboratory and creator of the Stanley car that won the second DARPA Challenge, took his vast experience along with his technology to Google to work on the development of Google’s self-driving car project. The Google project poached the technical team leader of Carnegie Mellon’s team that won the 2007 Urban Challenge, Chris Urmson, as well as the software lead for the Stanford University team that won the 2005 Grand Challenge, Mike Montemerlo. The Google self-driving car project ultimately spun off as Waymo, one of the leading companies in the autonomous car sector. The rivalry between Stanford University and Carnegie Mellon morphed into a rivalry between Uber and Google/Waymo. A bitter lawsuit lasted a year between the two companies regarding intellectual property and was abruptly settled in February 2018 for $245 million.

The DARPA Challenge competitors initially showed that self-driving cars were just that—a challenge. Not a single car finished the course, with the most prolific entrant completing a mere 7.5 miles of the 142-mile course. It wasn’t easy at the time to get a sense for how the competitions were affecting this new technology, but the gains were made incrementally with each challenge, and they clearly laid the groundwork for the driverless future.