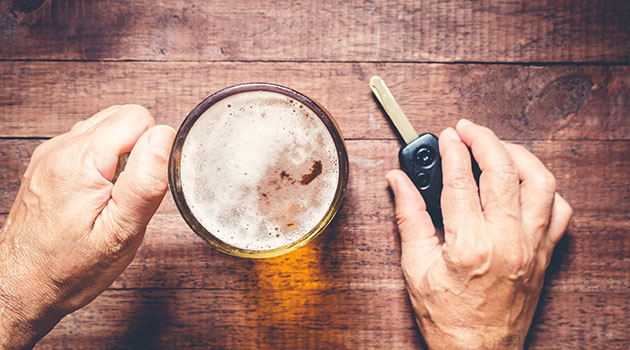 The emergence of self-driving cars could have a big affect on DUIs.
Autonomy Tomorrow

When California Highway Patrol officers encountered a Tesla blocking traffic on the jam-packed Bay Bridge during rush hour recently, they probably assumed that a mechanical failure was to blame. In reality, though, the person behind the wheel was intoxicated. To the officers’ certain dismay, the driver reassured them that it was OK because his high-tech vehicle had been in “autopilot” mode.

This is just an early example of the confusion that is increasingly arising concerning drunk driving laws in the age of autonomous cars. There’s one pretty big problem with the above example, however. Like any self-driving vehicle that’s legally allowed on the road today, the Tesla in question wasn’t a completely autonomous model. Current technology still requires human attention and, often, intervention. As technology shifts from semi-autonomy to full autonomy, however, the lines are getting blurrier.

To understand how complex this problem already is — even at this very early stage — it helps to understand current drunk-driving laws. They vary from state to state, but such laws typically share a few things in common and are designed to address certain realities. For example, current drunk-driving laws typically revolve around a handful of concepts, including the following:

Intent: In most states, a person doesn’t have to be actively operating a vehicle on the road to be charged with DUI. This is due to the way in which intent is defined in such statutes. Once a person is intoxicated, simply having the intention to operate a vehicle in that state can be enough to precipitate legal action. This is why someone may be arrested for drunk driving after being discovered in their parked car. With fully autonomous cars — i.e., truly self-driving cars — the driver may intend to get from point A to point B, but they aren’t intending to personally operate the vehicle.

Operator versus driver versus passenger: Drunk-driving laws carefully define terms like “operator” and “driver” to be clear about who should face punishment. Some states have already updated the language of these laws to reflect the onset of autonomous driving. In California, for example, an operator is defined as whoever is in the driver’s seat. The law goes on to specify that if no one is in the driver’s seat, the operator is whoever causes the technology to engage. Not too long ago, the National Highway Transportation Safety Administration, or NHTSA, informed Google that it now regards the systems controlling self-driving cars as “drivers.” By this definition, then, the operator is not “who” is running the vehicle but “what” is running the vehicle.

More new semi-autonomous vehicles hit the market all the time. The emphasis here is on “semi-autonomous” because that is currently the only technology that is being legally used on U.S. roads as of February 2018. Unlike fully autonomous cars, including Google offshoot Waymo’s driverless models that are currently under development and testing, today’s “smart cars” still rely heavily on human attention and intervention. This is reflected by the warning systems that such vehicles employ, including beeps or vibrations when obstructing vehicles are near.

Future Technology Will Define How DUIs Are Handled

Ultimately, the ways in which current drunk-driving laws change will depend on what emerges as the prevailing form of autonomous driving technology in the future. There is no surefire way to know what that will be, of course, but plenty of clues out there are already giving pretty strong hints. For example, Australia’s National Transport Commission recently came to some interesting conclusions regarding the matter. The commission floated the possibility that discouraging the use of self-driving cars as a means of getting home safely while intoxicated could actually stymie long-term progress.

The advisory board also touched upon another interesting potential aspect of the rise of autonomous driving technology — major boons for bars and other alcohol-related industries. While it is often difficult to convince an intoxicated person to call a cab, bartenders in the future may simply just need to prompt them to get in their driverless vehicles to send them safely on their way. By the same token, this technology could drastically reduce the number of drunk-driving incidents that must be prosecuted every year. This could save millions, or even billions, of dollars annually.

Another interesting development involves the aforementioned Google-sponsored Waymo. The startup has partnered with many safety organizations and associations to emphasize and improve autonomous technology’s ability to make driving safer for everyone. One of these partners includes Mothers Against Drunk Driving. This suggests that the organization sees real potential in reducing drunk-driving deaths and injuries through autonomous driving technologies.

Will Drunk Driving Soon Be a Thing of the Past?

There are no guarantees that driverless cars will permanently eliminate the issue of drunk driving. However, the continuing advancement of this technology is already changing laws across the country. This will only intensify as the world transitions from semi-autonomous to fully autonomous vehicles. That day may seem far off, but at the pace that things are progressing, it’s likely to become a reality sooner than most people suspect.