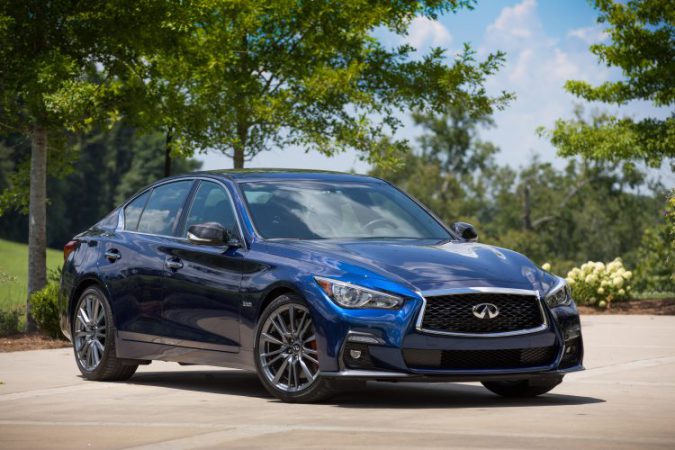 Recently, Nissan tested an Infiniti (Nissan’s line of luxury vehicles) Q50 autonomous car on the streets of Tokyo. The prototype had an advanced ProPILOT system with Level 4 autonomy, which means that it required minimal intervention from the driver.
Autonomy Today

Recently, Nissan tested an Infiniti (Nissan’s line of luxury vehicles) Q50 autonomous car on the streets of Tokyo. The prototype had an advanced ProPILOT system with Level 4 autonomy, which means that it required minimal intervention from the driver. Although that Q50 prototype with Level 4 autonomy is not predicted to hit the public market until 2020, there is a Level 2 version of the Q50 with a more modest ProPILOT system available today. The 2018 Nissan Q50 has several useful semi-autonomous driving features made possible by a forward-facing camera, a rear camera, multiple radar and sonar sensors, and an electronic control module.

This new self-driving car is Nissan’s first vehicle to use the ProPILOT system as its overall brand for driver support. With its current level of capabilities, the system is only meant to assist drivers. It features an advanced system for detecting lane departure, which provides corrective steering to keep the driver within the lane’s lines. The system has a supplemental feature that uses its cameras and sensors to detect minor directional shifts due to wind or pavement differences, and the car’s steering system responds with slight modifications for a smoother experience.

Nissan also improved cruise control with an autonomous touch. Drivers who dislike braking when approaching a slow vehicle from behind do not have to use their pedals as much now. With the ProPILOT system’s cameras and sensors, the new Q50 monitors surrounding vehicles to detect their speeds. The Q50 automatically adjusts its speed when approaching a slower vehicle. Nissan’s Infiniti Q50 also detects vehicles in the driver’s blind spots. If the driver is trying to make a lane change, the system helps bring the driver back into the lane with corrective steering.

Another useful safety feature that utilizes the ProPILOT system’s cameras and sensors is the backup collision detection system. The Q50 detects vehicles directly behind it and to the sides. If the driver is backing up while the Q50 detects an oncoming vehicle, bicycle, or person, it will push back on the accelerator and deploy the brakes. This gives the driver an opportunity to check the surroundings for risks. The system is also capable of forward emergency braking.

Although the ProPILOT system brings plenty of new autonomous safety features the to 2018 Q50, most of its basic features have not changed. The car averages about 30 mpg on the highway and about 23 mpg on city streets. It is classified as a midsize luxury sedan. With 208 horsepower, the new Q50 has a turbocharged four-cylinder engine. There is also a seven-speed automatic transmission option.

On the outside, the 2018 Infiniti Q50 autonomous car has a sleek and aerodynamic appearance. There is chrome trim around the windows, on the accents, and on the grille. The car has lightly tinted windows for a more aesthetic look and to enhance passenger comfort. It has automatic daytime running lights, front fog lamps, and LED brake lights.

The interior has a spacious cabin with leatherette seat surfaces, a leather steering wheel, and leatherette accents. There is an auto-dimming mirror, an interior power fuel flap lock, and steering wheel controls for using the ProPILOT system’s features. It even includes a driver foot rest, a locking illuminated glove box, and a trip computer. These are just some of the standard features. When buyers build their own Infiniti Q50 on the manufacturer’s site, there are more upgrades and features available.

How the Infiniti Q50 Autonomous Car Compares to Similar Vehicles

The Q50 is not the only self-driving car available with Level 2 autonomous features. However, it offers more features than some competing vehicles. For example, its ability to detect collision threats and take corrective actions when a driver is backing up is not a benefit that many vehicles offer. Its price is comparable to other self-driving vehicles with Level 2 autonomy. Although Nissan is not planning on rolling out its impressive Level 4 Q50 autonomous car until 2020, they are planning to add self-parking technology to the ProPILOT system in the Nissan Leaf. It is unclear if Nissan will make this feature part of the ProPILOT system for next year’s Infiniti Q50 model.