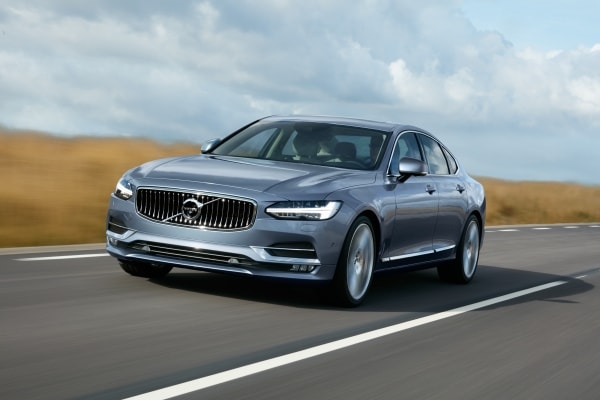 The new Volvo S90 is a Level 2 autonomous car, which means that it has partial automation. This sleek sedan includes the new Volvo Pilot Assist II technology.
Autonomy Today

The new Volvo S90 is a Level 2 autonomous car, which means that it has partial automation. This sleek sedan includes the new Volvo Pilot Assist II technology. A Level 2 self-driving car can use the brakes, steer, and speed up on its own. However, its capabilities in these areas are usually limited to specific circumstances. Drivers are responsible for changing lanes and making more complex moves. Cars cannot recognize road signs at Level 2 autonomy.

Volvo describes its Pilot Assist II technology as a semi-autonomous driving system. The system includes adaptive cruise control, which means that the car helps steer and keeps the driver in the correct lane. If the driver lets go of the steering wheel, the system goes into standby mode. Also, the lane markings on the road must be clear for the technology to work properly.

In comparison with the original Pilot Assist technology, the second-generation version does not require a vehicle to be in front of the S90 to function. However, it is still designed to control speed safely when the Volvo is traveling behind another vehicle at a speed lower than 80 mph. Volvo also added a disclaimer that reminds drivers of the system’s limitations. For example, it is unable to detect traffic signals or complex traffic conditions. The Pilot Assist II system uses the keypad with arrows on the left side of the steering wheel to work with its adaptive cruise control. Drivers can adjust time or distance intervals with the arrows after initiating the Pilot Assist II.

Features of the New Volvo S90

At a length of 200 inches, the latest S90 is longer than its predecessor. The model now has a spacious back seat that is comparable to a limousine’s. Passengers riding in the back enjoy improved sunshades that enhance comfort. Drivers can choose front seats with massaging capabilities. For the T8 plug-in version of the S90, the car can travel up to 17 miles on battery power alone. The gas-powered S90 can accelerate to 60 mph in 4.7 seconds. The driver who listed these features received a vehicle with an air suspension upgrade, which made the ride smoother.

Currently, all safety features are standard on the S90. However, those can be enhanced with the Momentum trim option. The Momentum trim includes steerable headlamps and a camera system with a 360-degree viewing range. The City Safety technology is one of the most useful standard safety features in the new S90. To help drivers avoid collisions, it uses multiple sensors to detect bicyclists, motorists, and pedestrians to issue warnings.

The Future of the Volvo S90 Self-Driving Car

The S90 autonomous car is just one of several vehicles that Volvo hopes to improve over the next few years. According to the company, its goal is to ensure that no driver will be killed in a new Volvo in 2020. As Volvo and other companies continue the strong competition to release higher levels of autonomous cars on the market, Volvo has not revealed all of its plans.

While one major competitor is preparing to release a Level 3 self-driving car to the market in 2019, Volvo is one of the few automakers that is setting its sights higher with the goal of releasing a Level 4 autonomous car soon. In addition to testing its technologies and working out any issues, one of Volvo’s top concerns right now is waiting for pending legislation to pass in favor of making Level 4 autonomous car technologies available to the public. Many federal laws do not make provisions for the latest technologies. Fortunately, legislators are largely in favor of autonomous features that may improve safety.